The Story of Purple

Pictures of flowers blossoming in hues of lilac, purple and violet, made us reminisce on how the essence of purple came to be.
Tears of the past into the present, made us look back on some history… 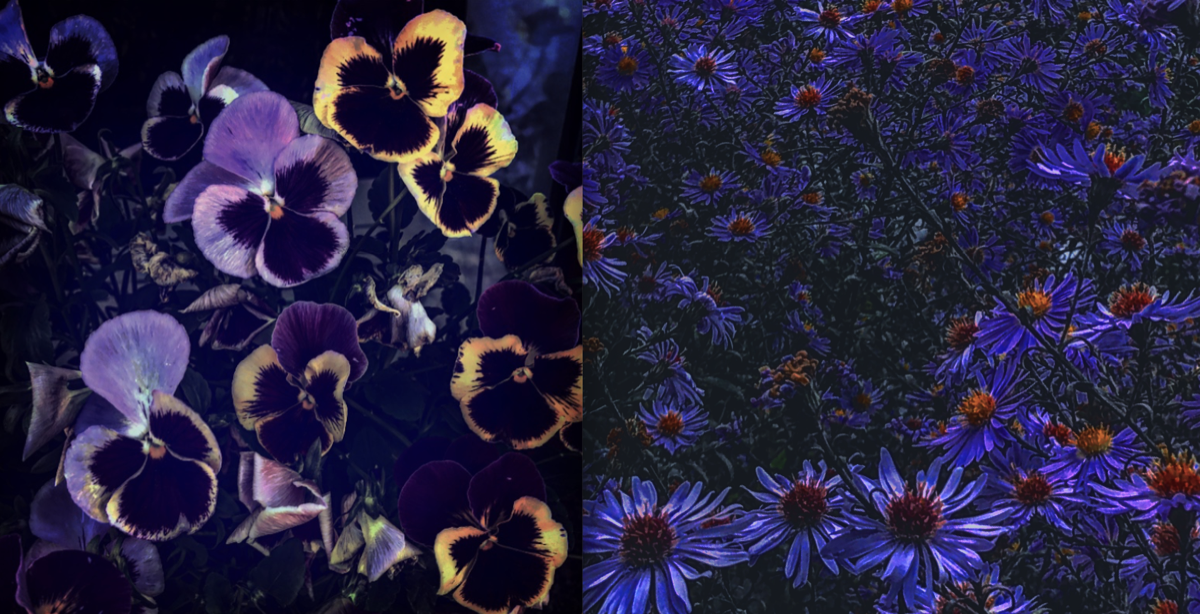 In a letter to Mary Haskell, Khalil Gibran once wrote, “Let me, O let me bathe my soul in colours; let me swallow the sunset and drink the rainbow.” Thus was his declaration upon thinking of drawing. In his description, colour for Gibran exuded emotion. A chosen colour in art, can be used as a tool to relay emotion alongside or instead of, its use for depicting an object in a colour it is preconceived to be.

Colour is key in art. When setting up to paint or draw, observation and imagination can go hand in hand, and colours seen, become the artist’s perception. Perception and interpretation is at the essence of observing what is to be depicted. For instance, a vase may be recognised as a particular colour, such as blue, but a painter may perceive it to be orange or may portrait it with infinite exagerated shades of blue, that may not directly be visible to all, but are perceived to be there, and therefore, for the artist, those colours are present. What a painter sees, depends on the light hitting that vase, on the amount of time spent painting, for colours change throughout the day, on the artist’s mood, its relation and emotion towards the object or subject, as well as on what the artist wants to convey.

Scientists, physicists, philosophers and writers such as Newton, Goethe, Wittgenstein, Locke and Descartes, have written and done studies on the colour spectrum or wheel and the wavelenght of light.
We can look to our landscapes to relay back to these studies. The sea not being blue and the colour of the sky come to mind. Many paintings have depicted nature in colours that an artist feels, like in 'The Scream' by Edvard Munch, or in Wassily Kandinsky and Henri Matisse's landscapes. Die Brücke and Fauvism art movements were known for their use of colour.

Nature is able to produce the most beautiful art, and with that, vibrant impressions of colour, one of which is purple. But what is the story of purple? How did the colour come to be, and what lies beyond a colour used in a painting. 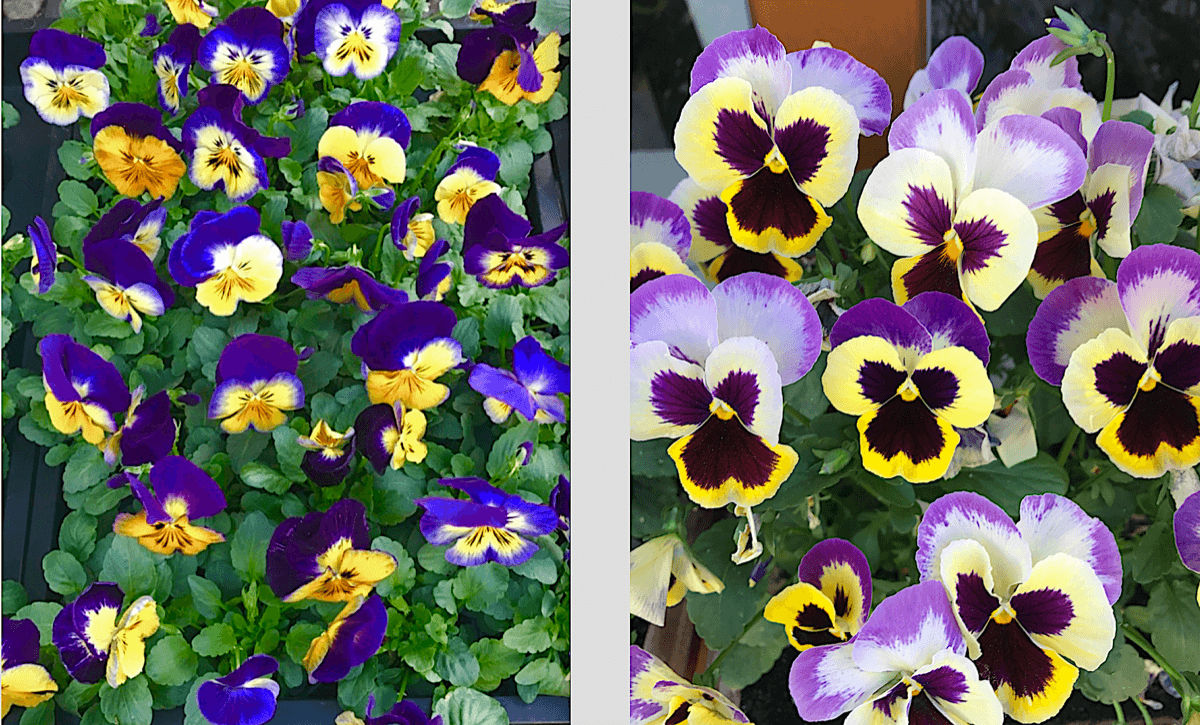 The story of purple begins in Tyre, a city on the coast of Ancient Phoenicia, in today's Lebanon. It emerges when a dog belonging to the philosopher Heracles of Tyre, ran towards the shell of a sea-snail known as murex and bit into it, resulting with the dog’s mouth being stained in a colour, that we know today as purple, named then, Tyrian Purple.

Thereafter, as the colour was difficult to come by and make, due to the vast amount of murex needed for the dye, Tyrian Purple reigned in value and throughout the Byzantine and Roman Empire. It was established as an imperial colour and for ceremonial robes. In some eras, laws were put into place so that only kings or emperors were able to wear the colour. The colour flourished in importance and it denoted power.

This association still reigns on today, as the colour is the choice of Royalty, bishops, cardinals, the Pope, and magistrates. The British chocolate Cadbury apparently chose purple as it was Queen Victoria’s favourite colour and thus associating its brand with a royal reference.

The value we place to colours is true to most, for instance, the colour red also has an imperial connection.

Time affects value and things we associate together.

In politics, the colour purple is linked with the sash of the Suffragettes. It is also within the name of the anti-apartheid protest that was held in Cape Town on 2 September 1989, known as the The Purple March, because a police water cannon with purple dye was used on thousands of protestors, staining them in the process. The brilliant artist Mary Sibande, created an artwork series entitled "The Purple Shall Govern" where her figure Sophie, takes back the power from the suffering imposed on her and on many. 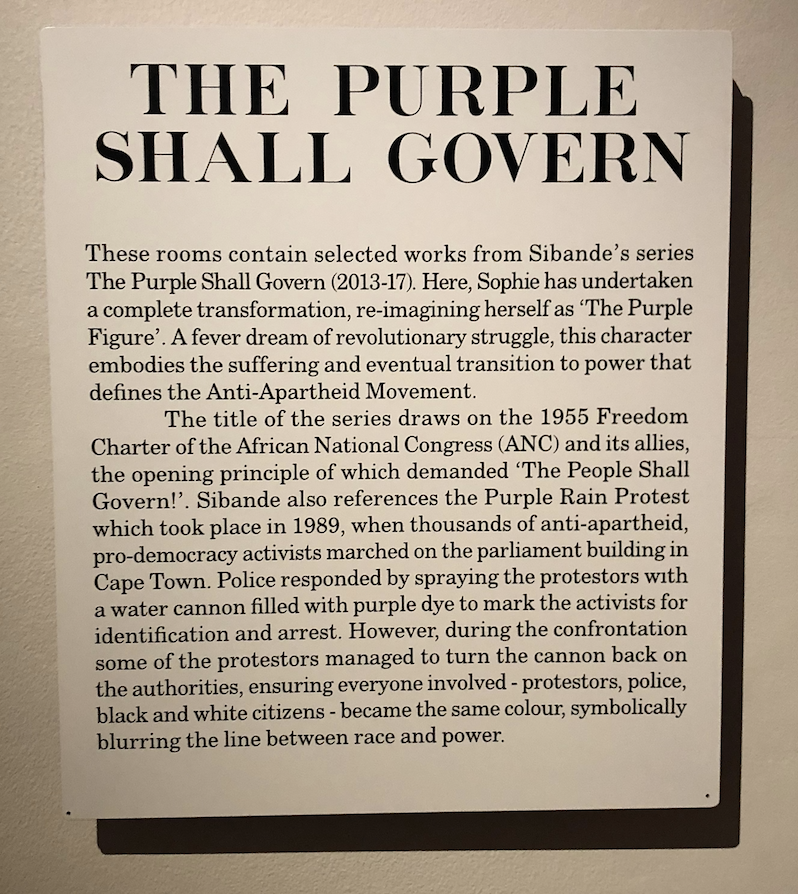 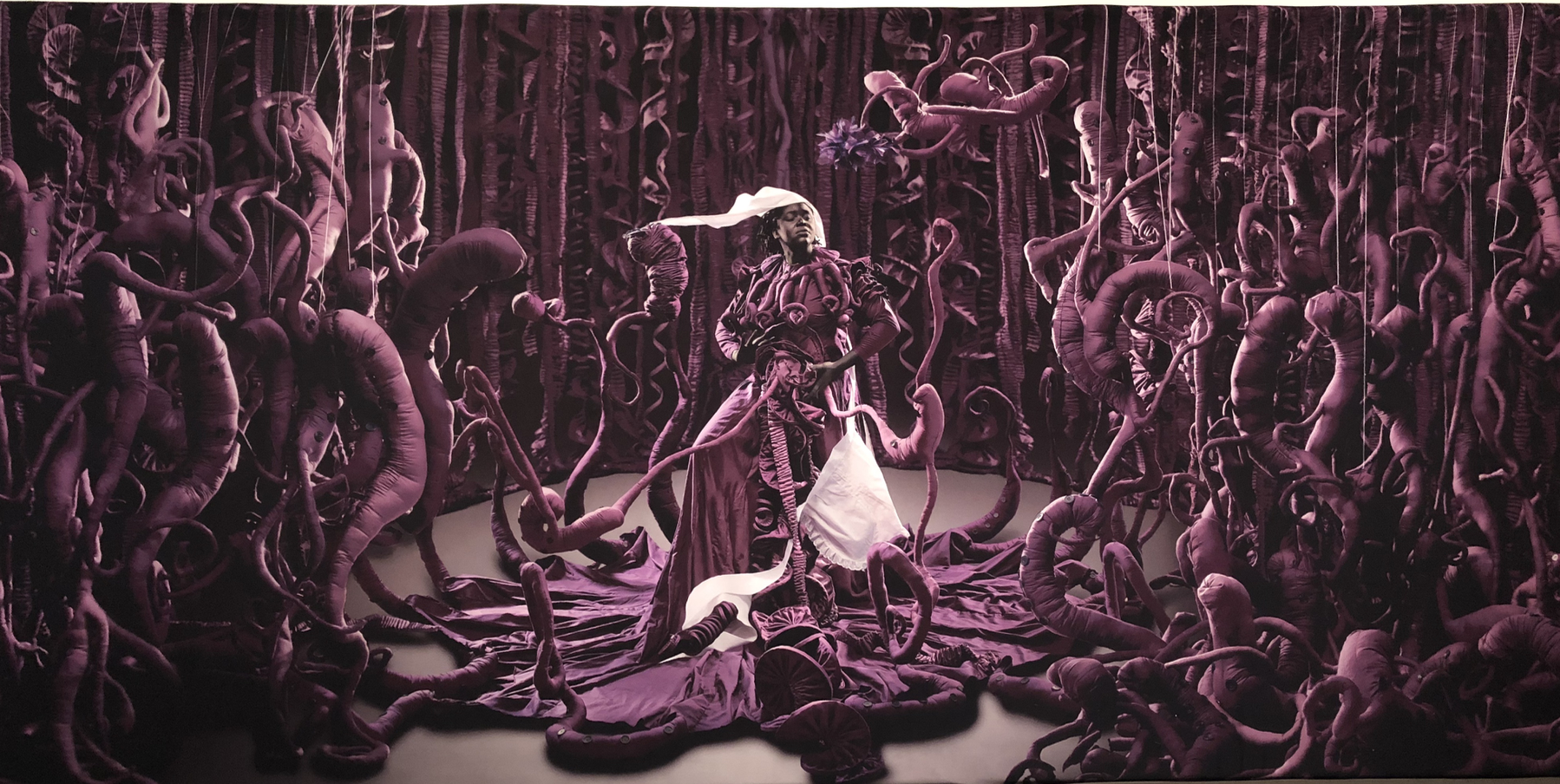 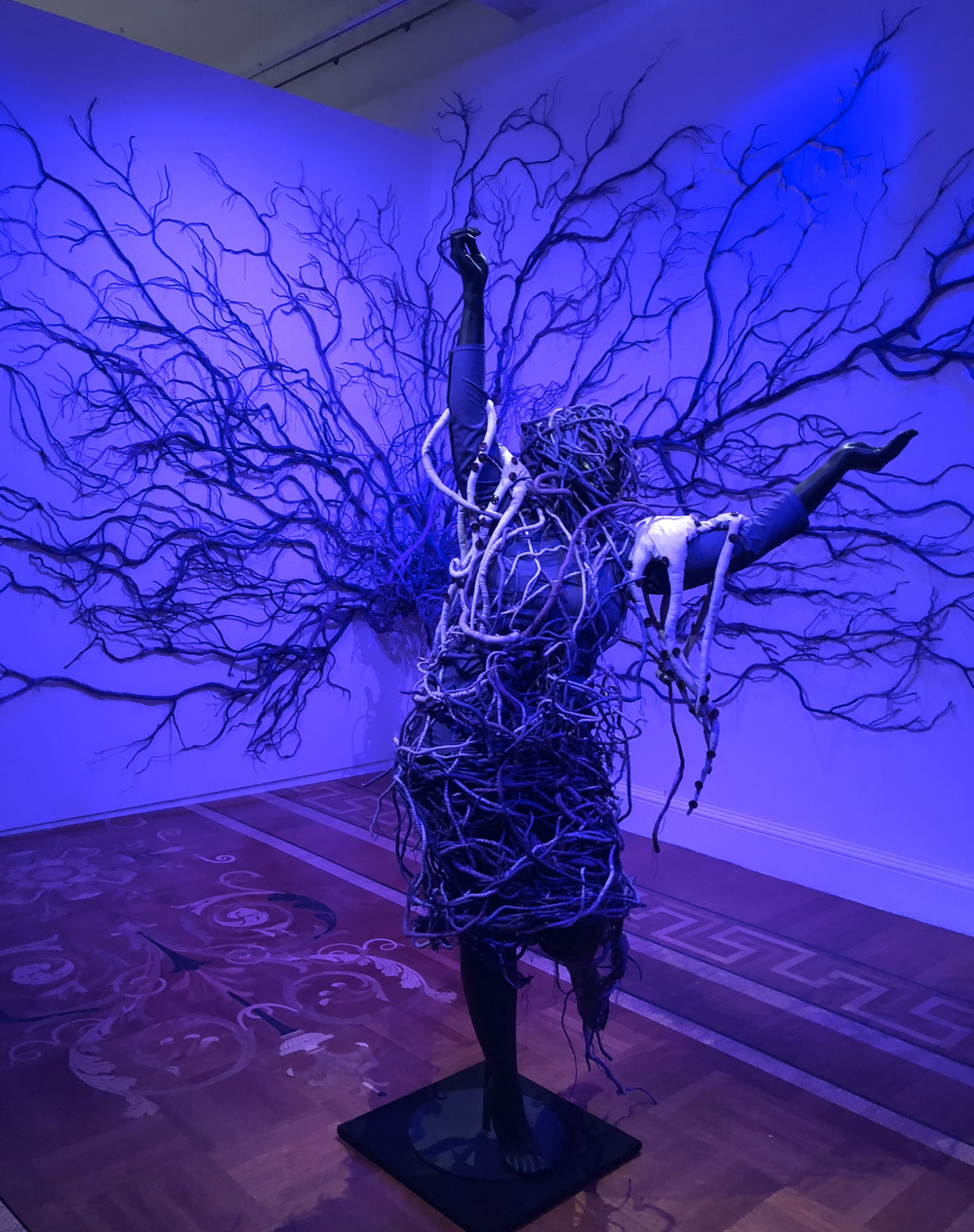 Mary Sibande 'The Purple Shall Govern" seen at Somerset House

Purple is also a colour of remembrance. A purple forget-me-not flower, was the official emblem of the 100th year of Remembrance of the Armenian Genocide.

Pigments of the colour vary, and what is considered purple could be anything from lilac, mauve to even indigo - which is also considered blue. It is important to note that, while colours may visually be referenced with empires, power and royalty, how they were made historically and by whom is also of great importance and needs to be remembered and acknowledged. Dyes, spices and so forth were like currency, as data is to many today. The wealth that was amassed through dyed cloth was vast. Part of the colour indigo's story, has a deplorable and disturbing history of amassing wealth through the plantations and slavery.

Purple fills the pages of literature. Tyrian Purple is mentioned in the Iliad of Homer and the Aeneid of Virgil, and the colour is referenced in Rudyard Kipling’s book ‘The Finest Story in the World’.  Forever in our hearts and minds is the heartbreaking and important book, winner of the 1983 Pulitzer Prize, 'The Colour Purple' by Alice Walker, which addresses numerous issues on the life of African-American women in the Southern United States.

In the arts, Purple Rain, a song by Prince, or the artist formally known as Prince, immortalised the colour on the tip of our tongues whenever the song is played.

Purple in fine art draws us in. Going back to referring to paintings, Tyrian purple and its discovery, was depicted by Peter Paul Rubens in ‘Hercules' Dog Discovers Purple Dye’. Francis Bacon’s paintings ‘Study for a Head’, ‘Study after Velazquez’ and some of Bacon's other paintings, turns the colour purple into a main feature, and Claude Monet’s landscapes, some of his water lilies and his London scenes such as ‘Waterloo Bridge’ makes use of the colour’s ability to sway between hues of light and shade.

Purple was probably used in many other arts, and in reference to other moments not mentioned here. Thinking of how it came to be and where it travelled to, made us start this quest on its history.

Purple tints travelled from nature, across land and the Mediterranean, onto cloth, art, through politics, wealth, pain, injustices, struggles, textiles, into mass production and through our senses as we view nature’s flowers in a multitude of shades of purple, sunsets fading into hues of purple with other colours of red, orange, pink, water glistening into slight purple fragments of light, our hearts beating for injustices to be put right, and tints of purple as we walk through life. 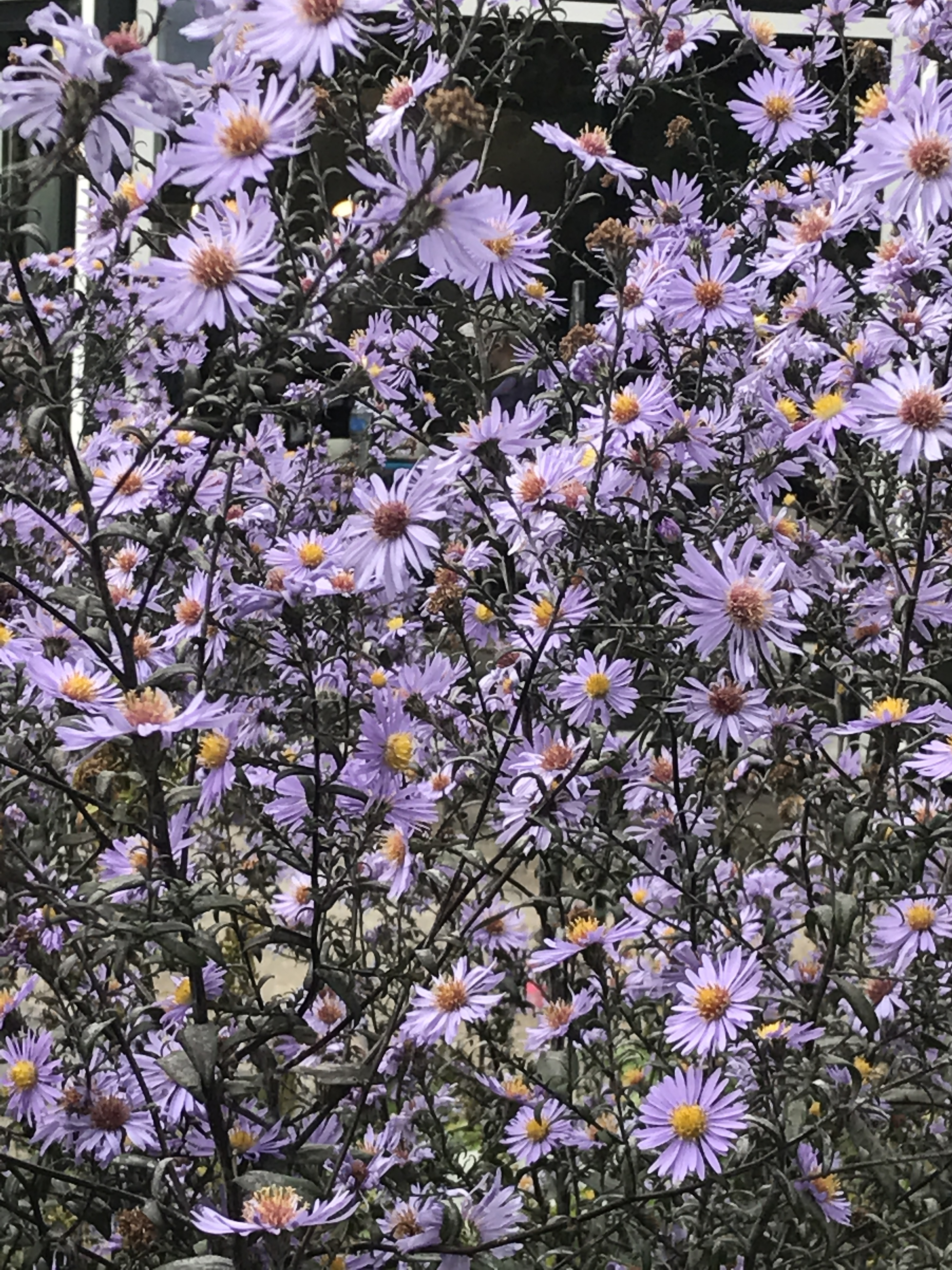 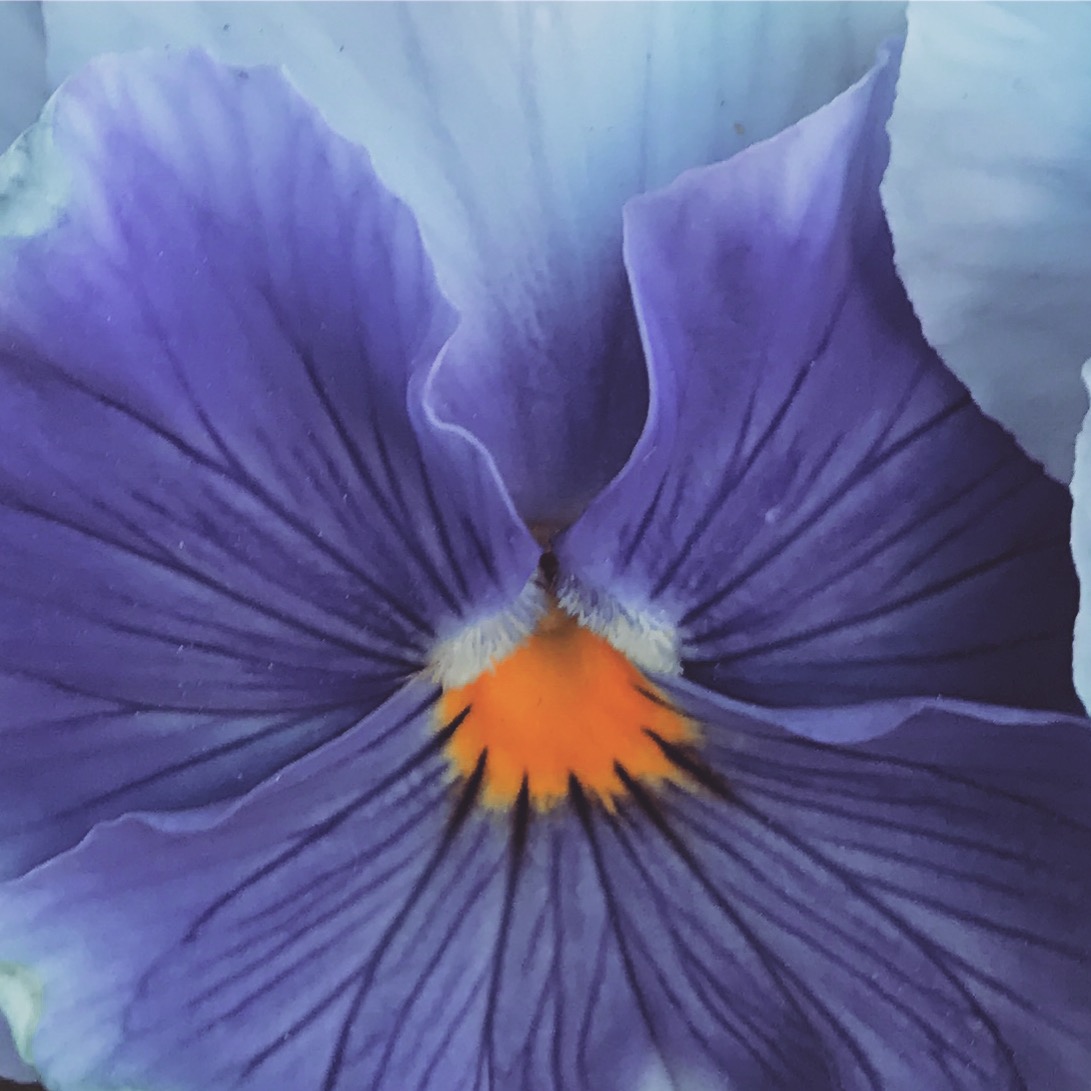