After seeing the knotted gun, wanted to share and write about the project and organisation behind the sculpture. Art in public spaces can create an impact  onto our thoughts and feelings, engaging with society, communities and state, and which messages each want to put forth.

Founded in 1993, The Non-Violence Project is a non-profit organization which aims to prevent and reduce violence in the world. Co-launched by Jan Hellman and Rolf Skjöldebrand, they propelled artist Carl Fredrik Reuterswärd's sculpture of a knotted gun, called “Non Violence” into a global project and foundation active around the world for peace.

The knotted gun by artist Carl Fredrik Reuterswärdcame was created in 1980 after John Lennon was tragically shot. The artist made the sculpture "Non Violence" as a tribute to Lennon's belief in peace. At first it was exhibited in Central Park New York at the Strawberry Fields memorial, then a bronze version was donated by the Government of Luxembourg and placed in 1988 in front of the United Nation’s headquarters to inspire peace. Since then, many versions of the knotted gun have been situated around the world, such as in Beirut, Lebanon, in Vienna, Austria, at the Olympic Museum in Lausanne, Switzerland, at the Waterfront in Cape Town, South Africa and in many other cities. The knotted gun "Non Violence" has also been interpreted by artists and the foundation's ambassadors.

Violence is sadly part of our world, as the non profit states, violence takes up many forms, including domestic abuse, bullying, harassment and much more. Fortunately there are many people around the world working for peace either in their professional lives or for a belief in humanity, where through conversations, dialogue, education, empathy, understanding, and art, societies may become less violent. Power and greed may often stand in the way, but love and togetherness may also create a shelter from that. To cultivate that process, education could lead onto a peaceful path.

The Non-Violence Project turns to education and empowering the next generation through initiatives to raise awareness against violence. Producing educational programs that promote social change, the Schools for Peace encourage exploring issues regarding self-esteem, conflict management, and non-violence. The non-profit organization also sets projects around the world, including " 21 Performances for Peace" launching in autumn by the Non-Violence Project UK team headed by Clem Leech, an initiative involving 21 artists performing three songs or poems for peace.

The arts are a vehicle for peace, and art in public spaces can remind a world to reflect on humanity.

For more information on all the initiatives check: https://nonviolence.com

Some pictures we took of the knotted gun 'Non-Violence' in Beirut, Lebanon, part of AUNOHR initiative. 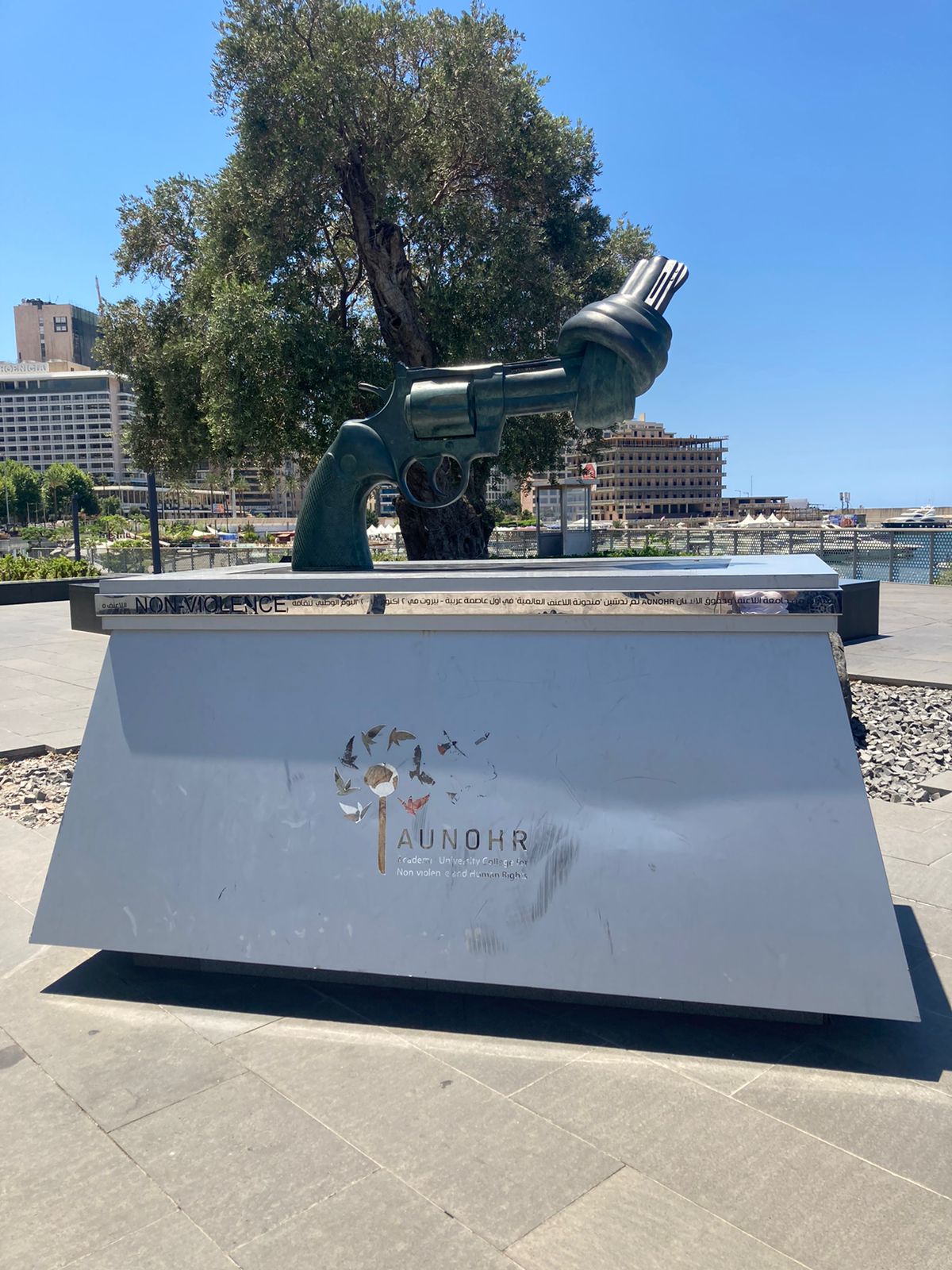 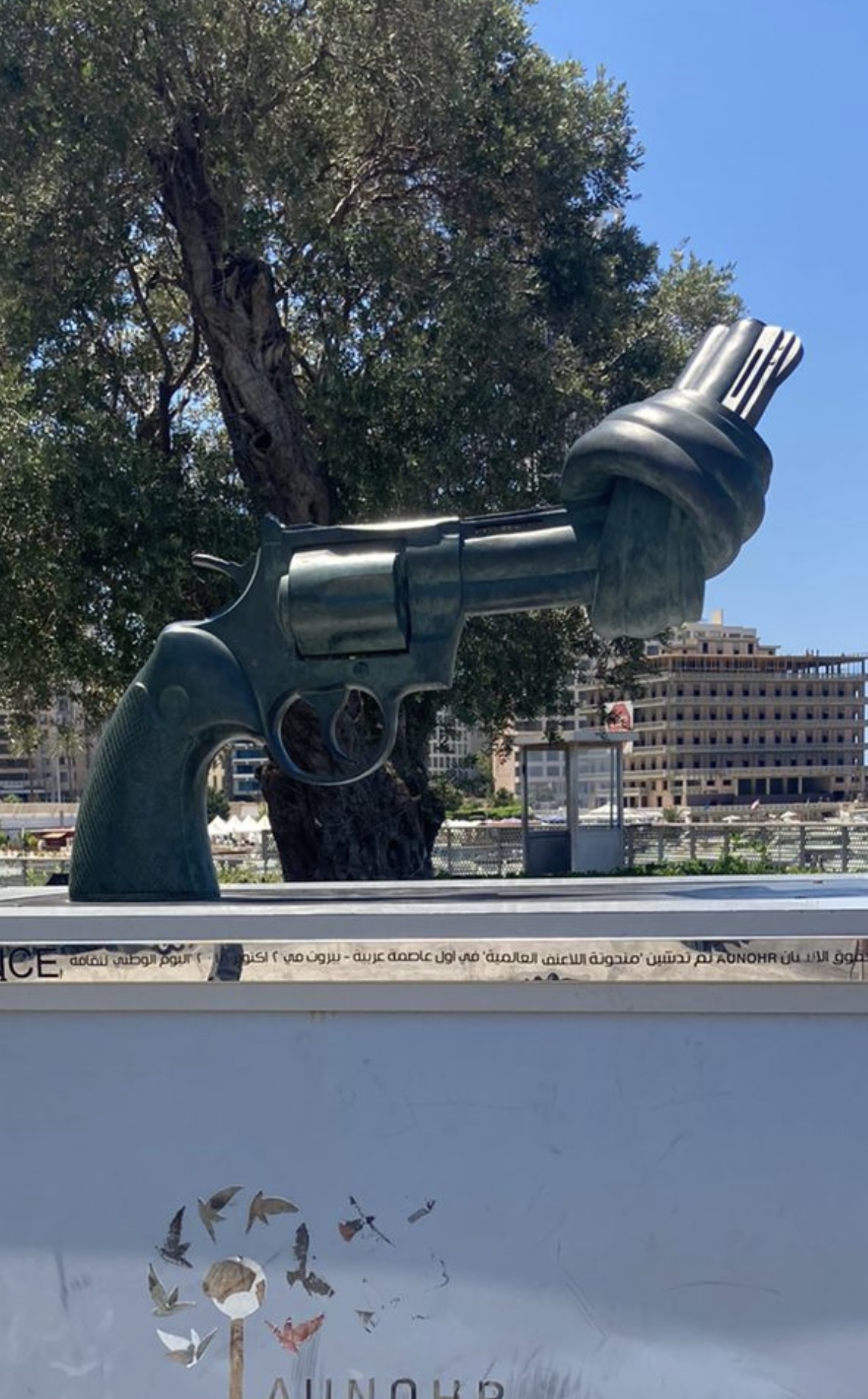 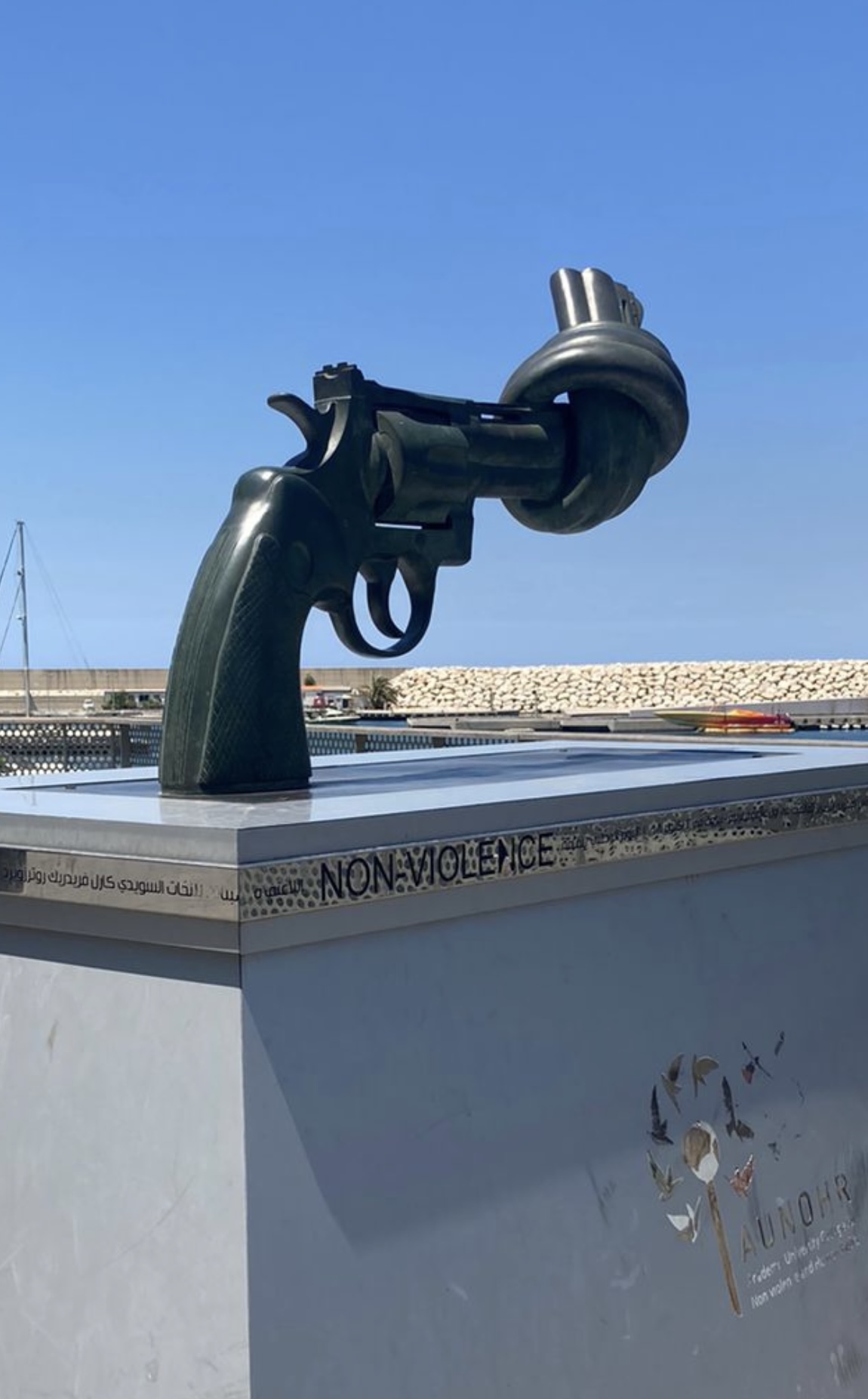 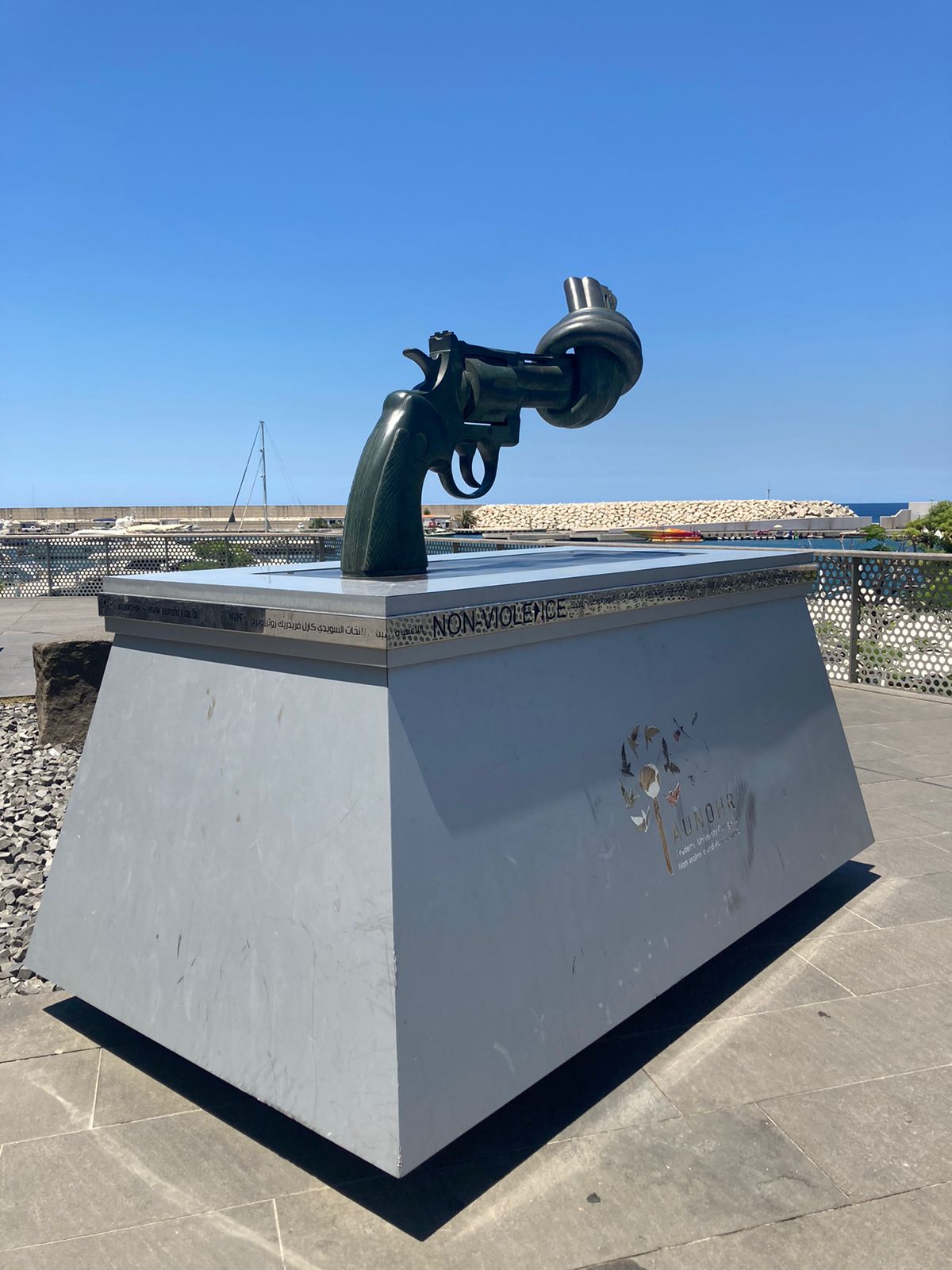 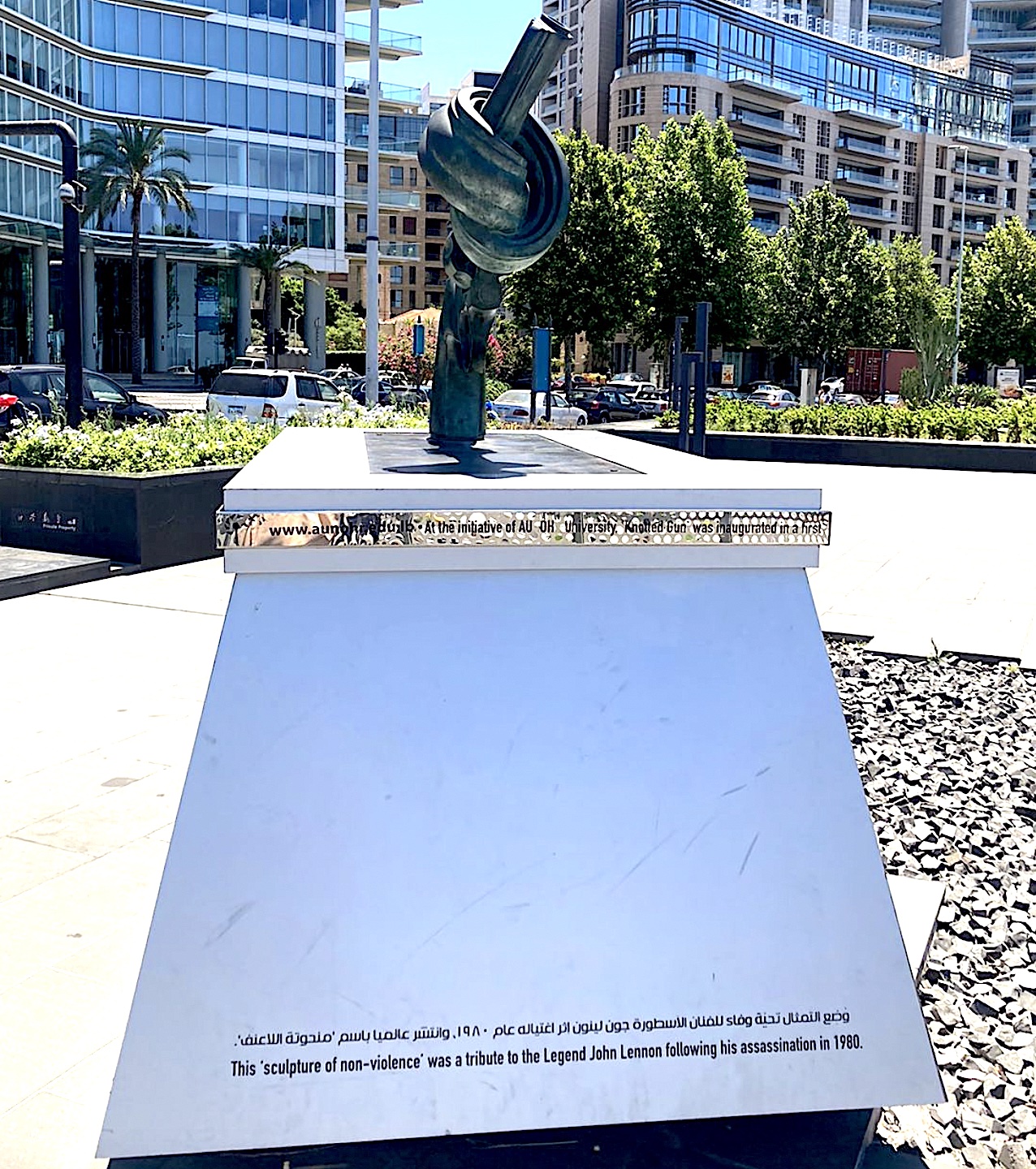 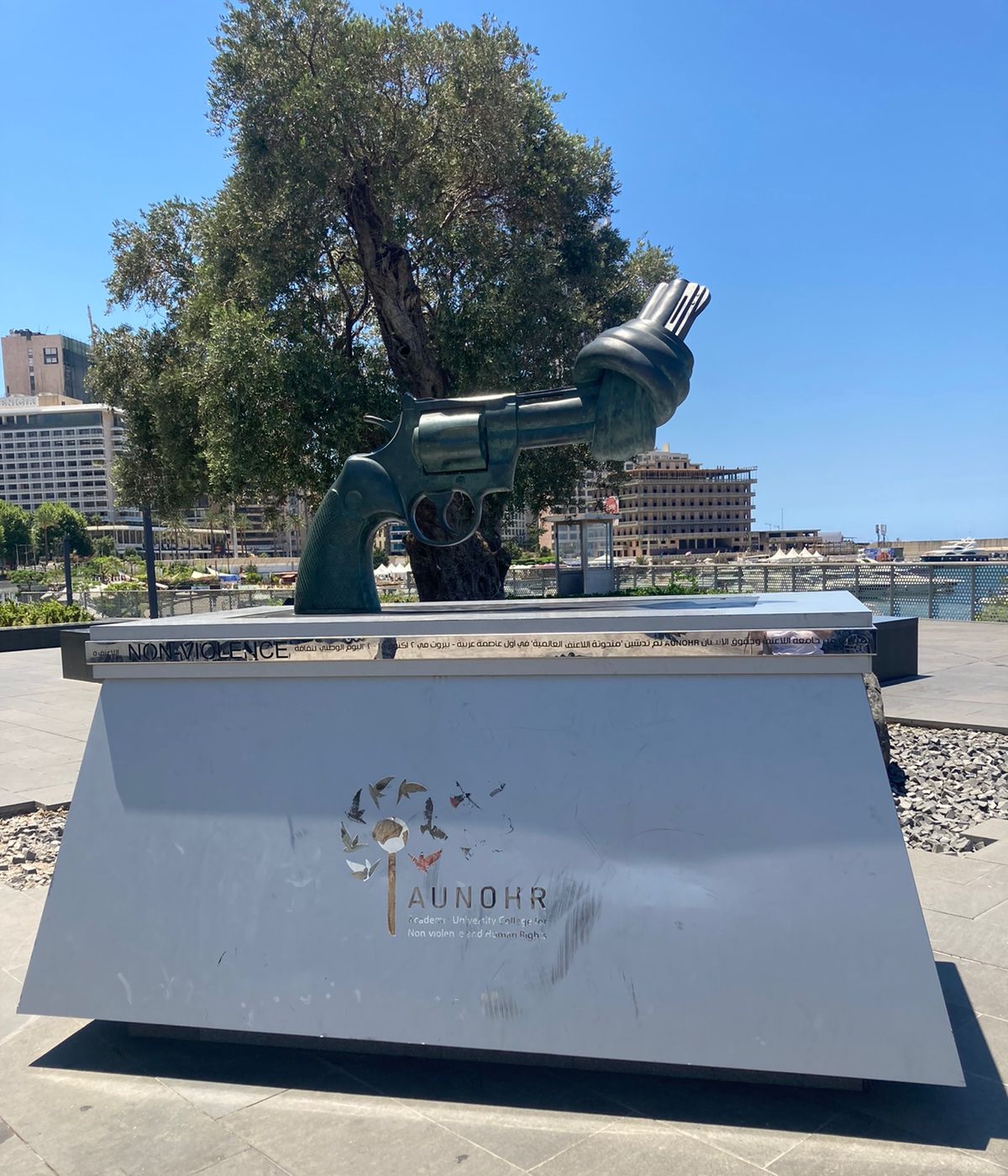 You may also read The Global Campus of Human Rights Au bord du monde,vivent nos vertiges At the edge of the world, lies the ebb and flow of promise In the Footsteps if Cai Lun II Selected works on paper at Ayyam Gallery