Walid Ardhaoui on his approach to Art, on Tunisia, Drawing and Painting People and Everyday Life, Realism Art and on Documenting his Environment through Art for the Future 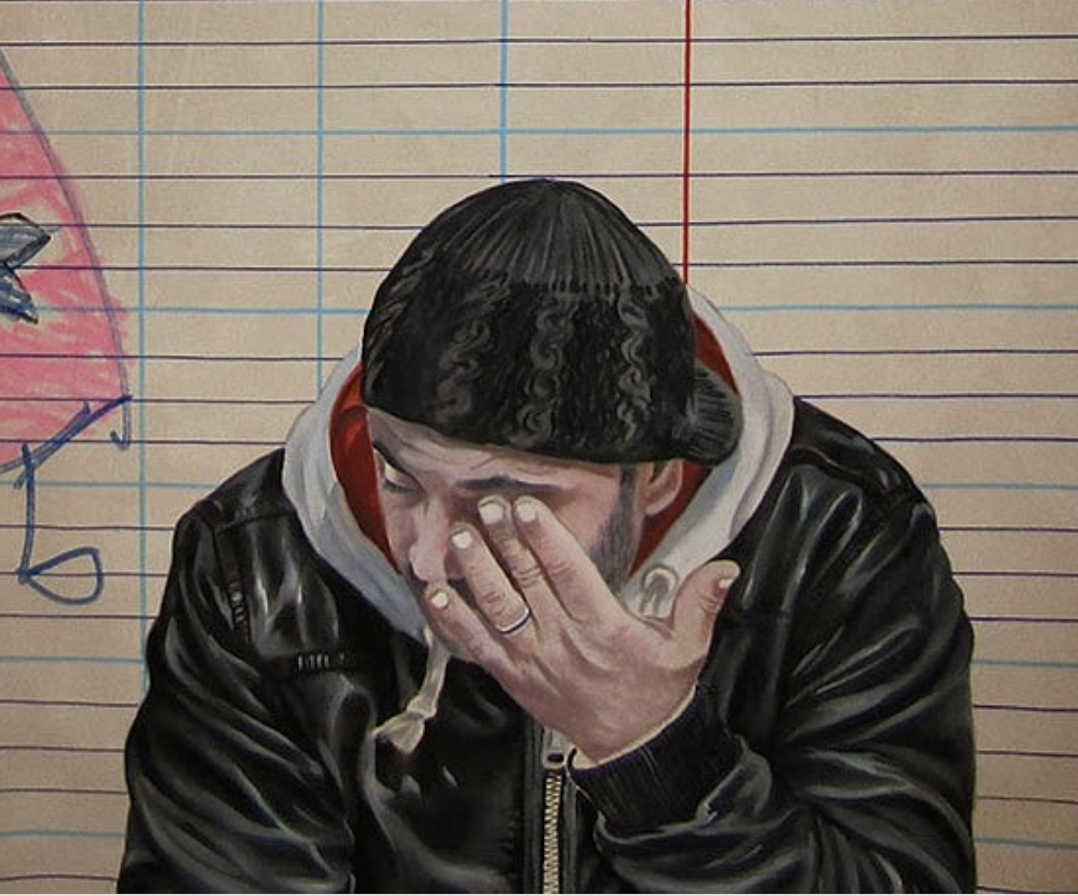 Walid Ardhaoui’s work is currently on display with A.GorgI Gallery at the 1:54 Art Fair at Somerset House.

The artist's take on hyperrealism tackles in a same artwork the subconscious thought with the conscious and the present state with a dream like attribute. He often suggests but never states social or political issues, issues such as immigration, consumerism or the hardships of everyday life, leaving the viewer to interpret his artworks as they wish but intending for his pieces to document the current environment in Tunisia. Through his art, the barrier of language and culture breaks down as he reflects on human life, showcasing the everyday, for it to never be neglected. Through bringing together drawing, painting and photography, the drawn figures come to life. 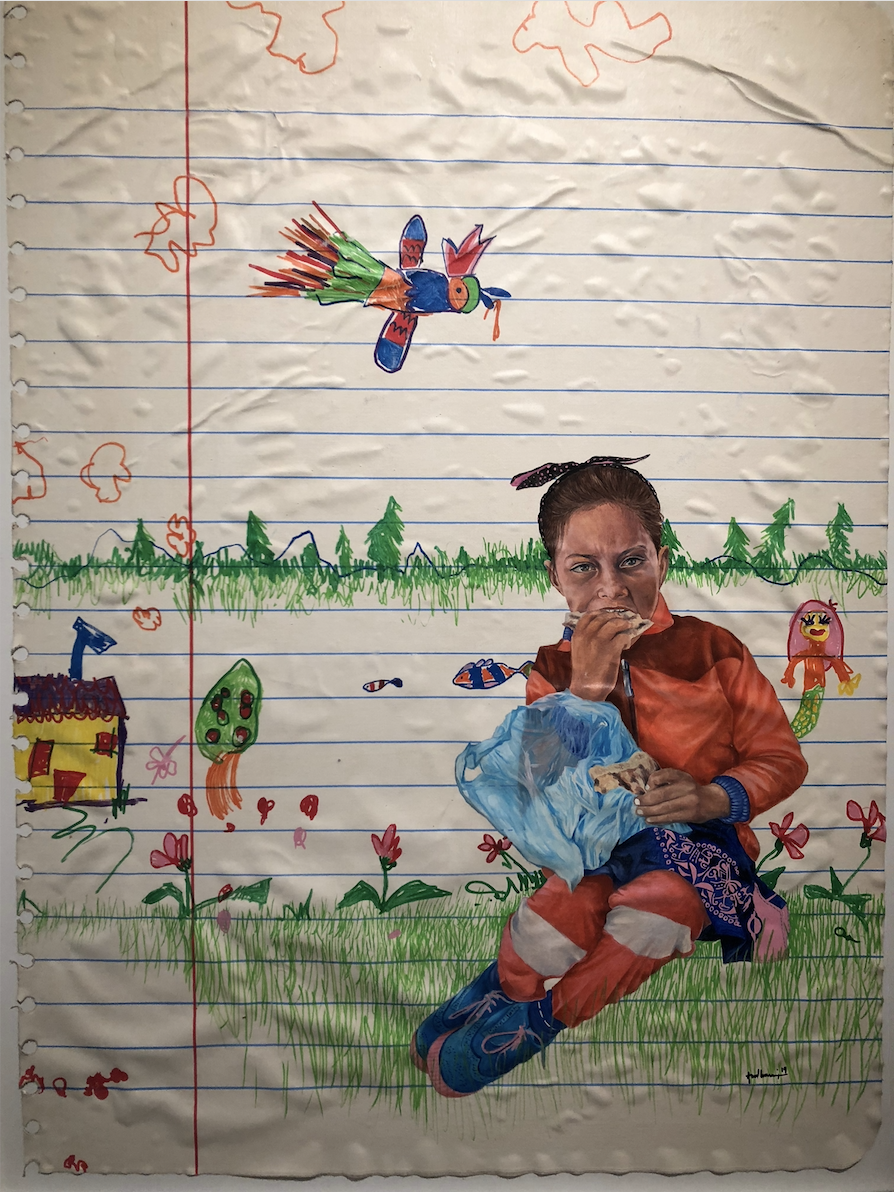 When did you first approach art and what does painting mean for you?

In 1994, after being selected from a large group of students in Tunisia, i was accepted for a pilot art class. Painting represents part of me and of my life. I can’t live without it. In fact I am an architect designer and had obtained this diploma to satisfy my family, especially my father. I have worked as an architect, but I couldn’t continue, there was something for me that was missing, so I dropped the architecture to devote myself to painting.

You then exhibited in 1997 at the Vision of Europe in the year 2000 in Strasbourg, France. How was that experience?

It was an excellent experience, It was my first exhibition. I was there with other students from my class accompanied with our teacher. It was an opportunity for me to visit galleries in France and to meet other young artists from other countries.

You’ve lived, worked and exhibited between Dublin, Dubai and Abha, do you think art can be a force to unite different cultures or at least bring about different perspectives for there to be more understanding in the world?

I think the two are true. However, cultures around the world are very different because of their geographical implications, and so in some cases art can unite the cultures of some countries and in other cases it is difficult to do so. Regardless, art remains always a universal language.

What effect has Tunisia had on your art?

My art focuses on the current circumstances and life in Tunisia. The figures I paint are representative of some Tunisian people living there that I draw from my daily life. So I consider Tunisia as my source of inspiration. And maybe, after many years, my paintings will represent an illustration of this period of time. 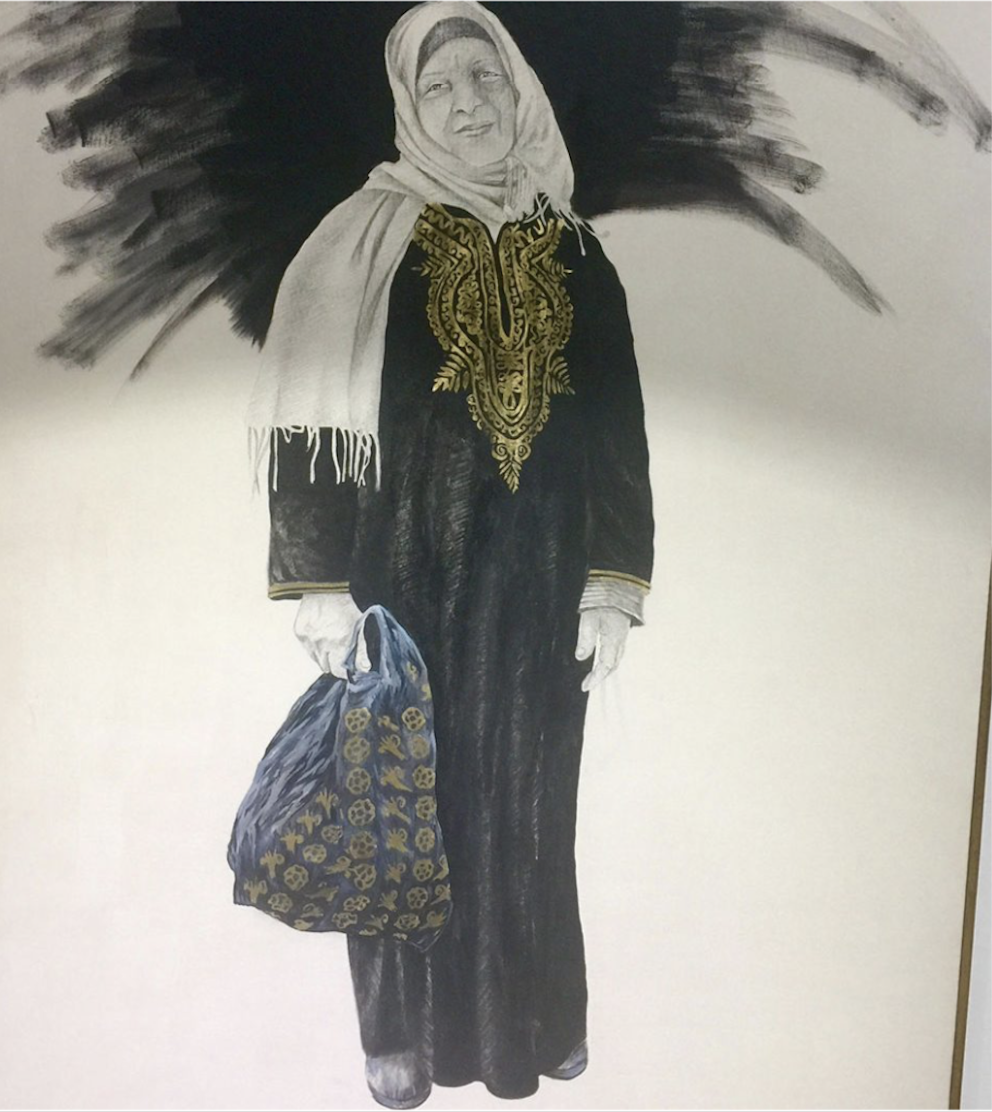 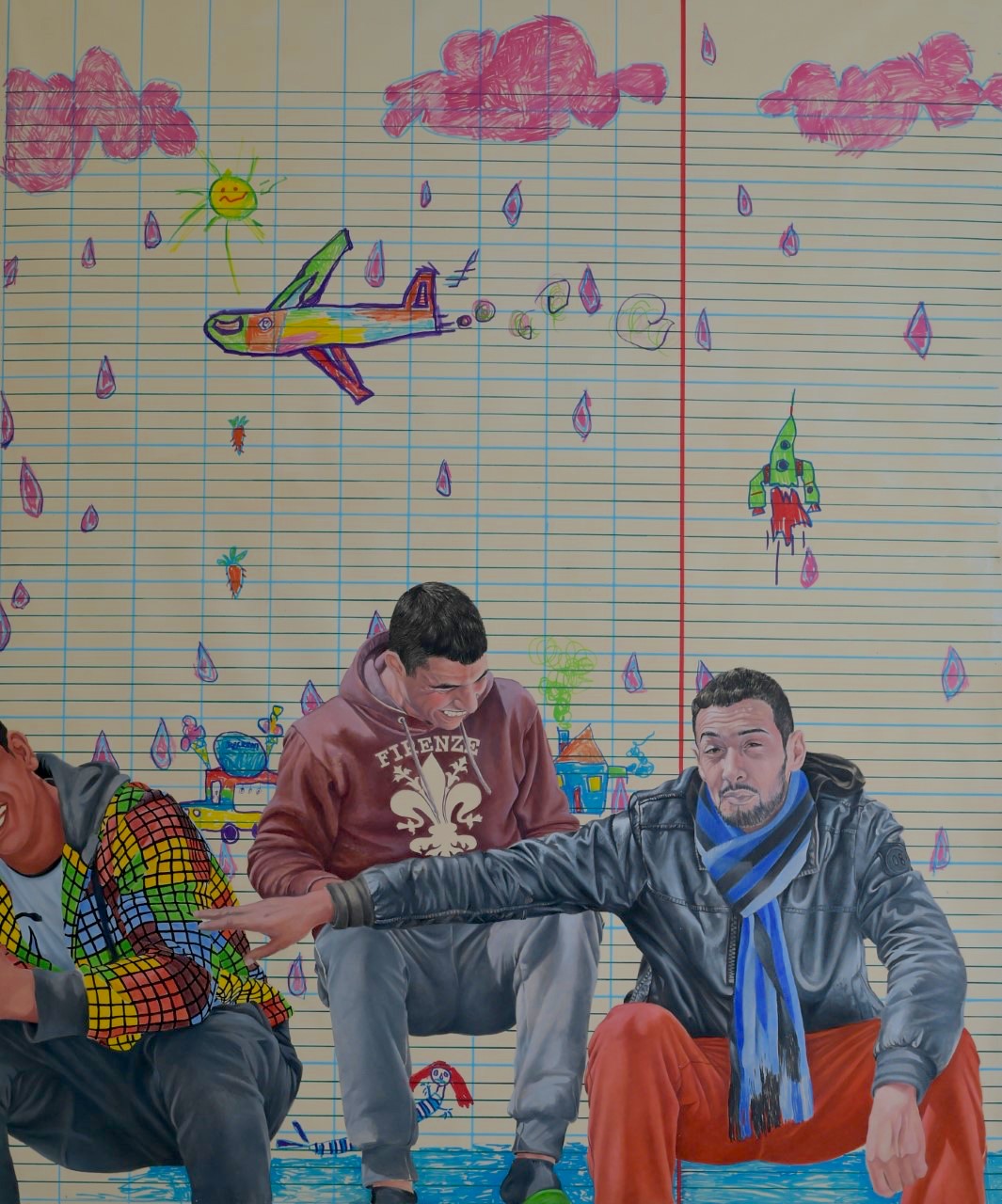 What themes are you drawn to for your artworks? And what is behind the idea to paint realistic figures immersed in a consumerist newspaper?

I try to represent in the same pictorial space two completely different truths; that is the way of representing the world as it is, as the world comes with different perspectives. The approach i take to represent a theme is by depicting precise details through realism art. And with the recent artworks, this has been alongside primitive art strokes i've done, that all the children of the world may do. This duality of artistic approach, may also reflect the duality of our subconscious and consciousness, and with that, the plurality of different lives or perspectives there may be around in the world. I think though, that these two different artistic approaches i have recently done, do not fit into a certain pictorial coherence but, i want to present this continuous paradox that is difficult to grasp. I may transcribe my painted figures on a rigid page that subconsciously refers to institutions or on a newspaper that references notions of power that govern our world. It is a revolt for the one who cannot find his place anywhere!

You’ve mentioned that you use photography as an intermediary between reality and painting, could you tell us more about this?

As I paint figures to appear realistic, I cannot do it without photography. Photography helps me to respect all the details. 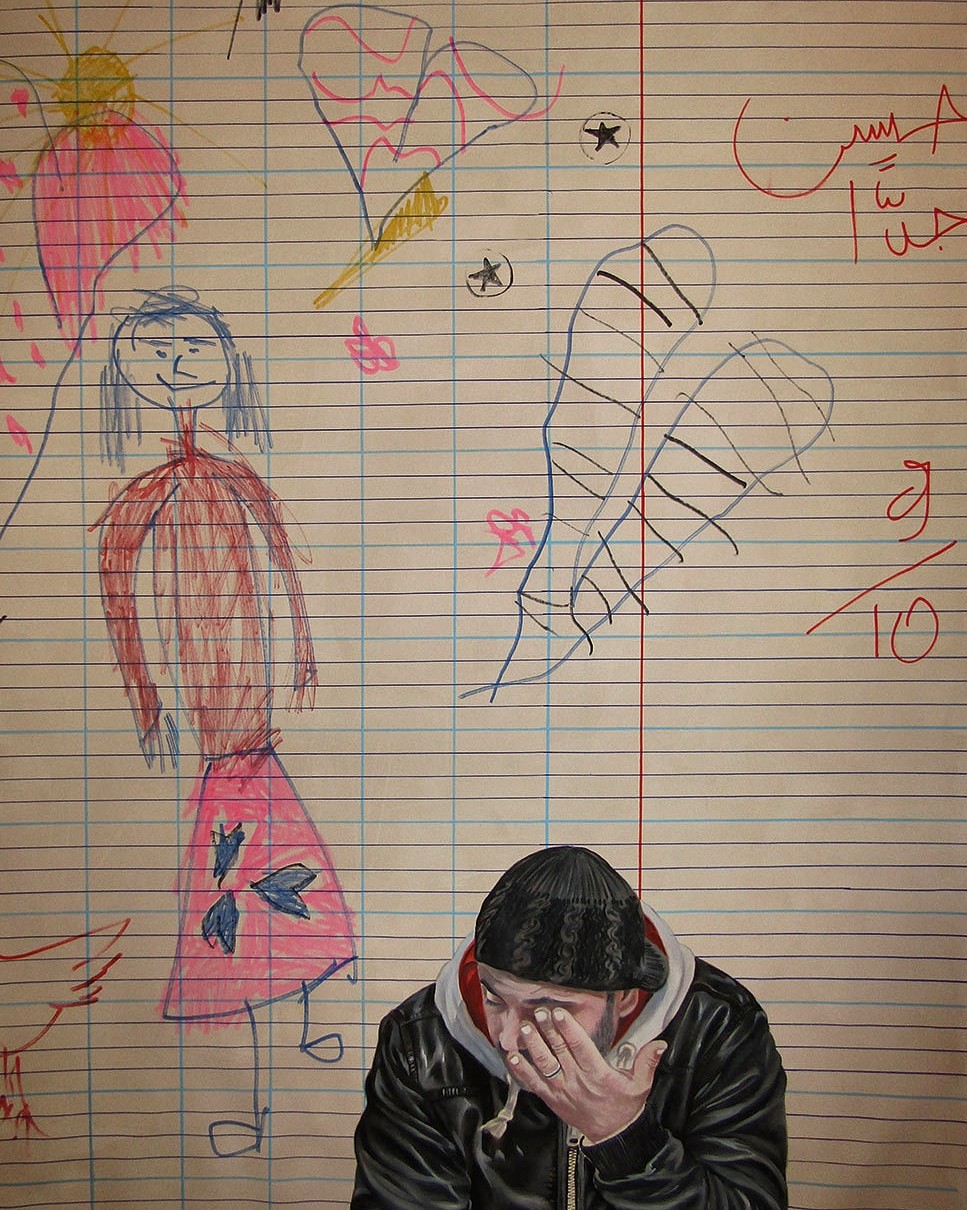 For the Jaou 2017 event organised by kamel Lazaar Foundation, you participated with the Aicha Gorgi gallery. The theme of the event was “The Migrant Nation”. You mentioned that through your art, you traced the sad journey of some young people, "where dreams begin with a smile and a bright future to end in disappointment and bitterness". What were your emotions behind this body of work? 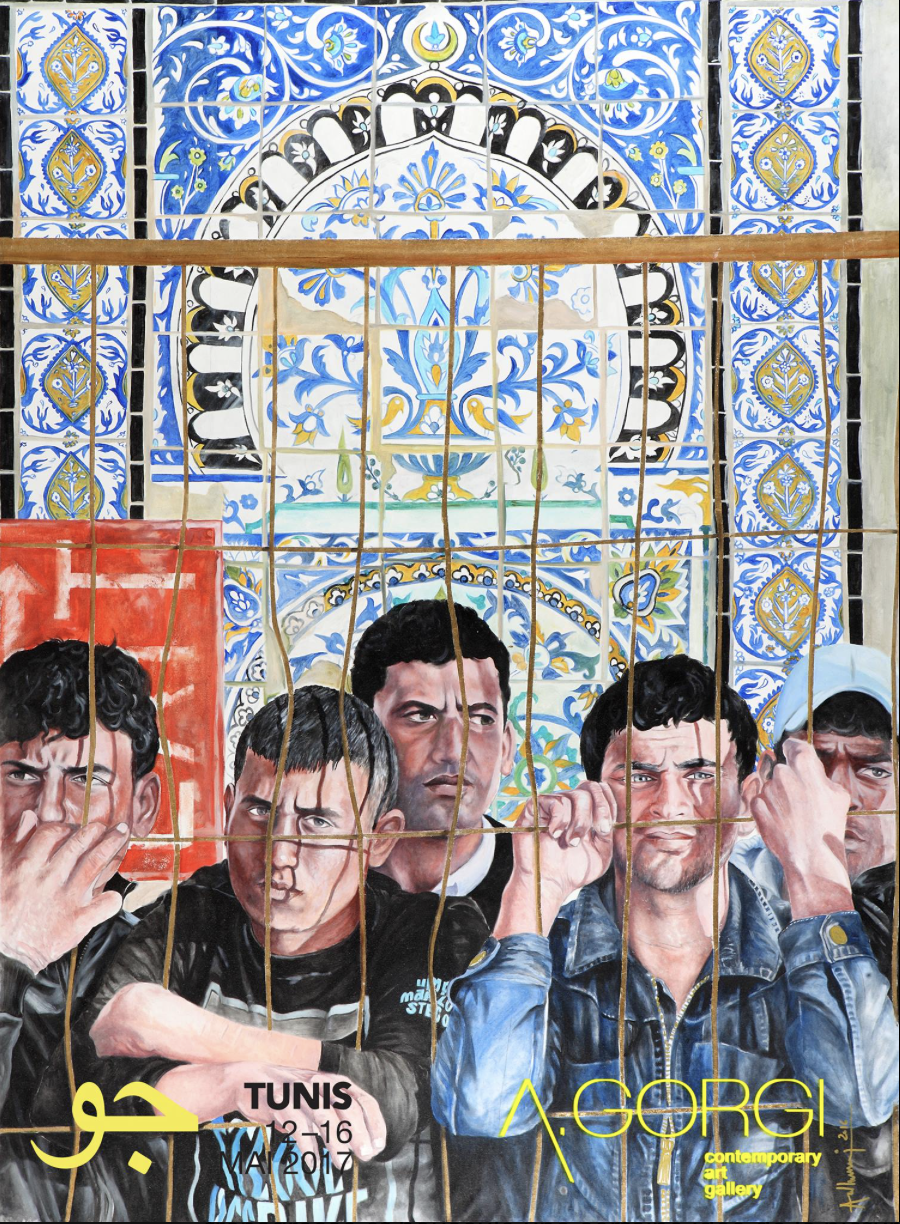 What was you’re exhibition « Ers Edhib » about?
And does art help you reflect on what is around you, on political and civil society?

The title of the exhibition is borrowed from an expression in the Tunisian dialect, used when it rains and the sun shines, a real paradox!

A rainbow “Teslit Onzar” or the bride of the rain, represents a mythical interpretation or supernatural phenomena from the Tunisians Amazigh who tell the tale of a wolf's wedding as a cosmological myth. It's the story of an unequal marriage between a jackal and a fairy. In more frequent novels it's between a wolf and a fairy tale donkey. Nature was angry, the sky poured with rain, but then the sun emerged when the animals decided to exile to the top of a mountain. Thereafter, nature expressed its satisfaction with the rainbow.

My exhibition was composed of 23 paintings. A donkey was painted on every canvas, with oil painting, ballpoint pen and acrylic.

These painting have been interpreted in different manners: political connotations, tenderness, childhood and so forth. 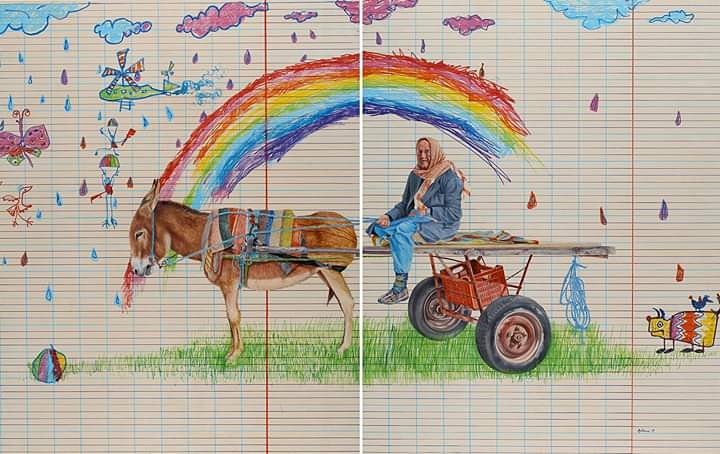 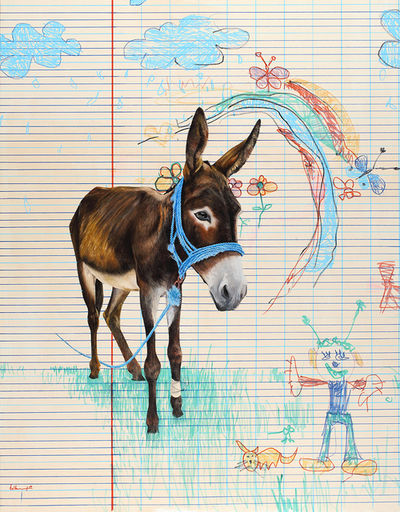 In October I will participate in the exhibition « Will the 21st century be African? » at the gallery of Yosr Ben Ammar.

I hope there will be an increase in new avenues for Tunisian and African artists. 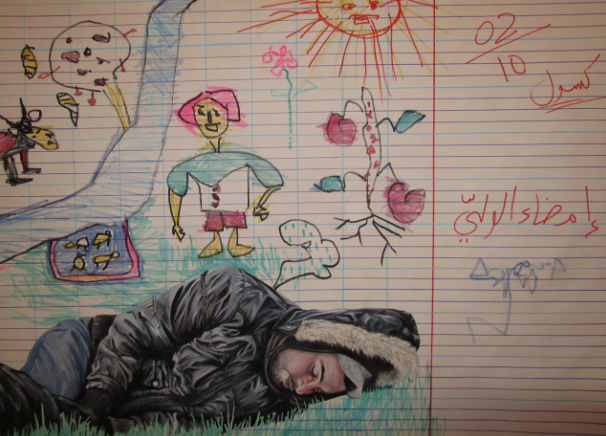 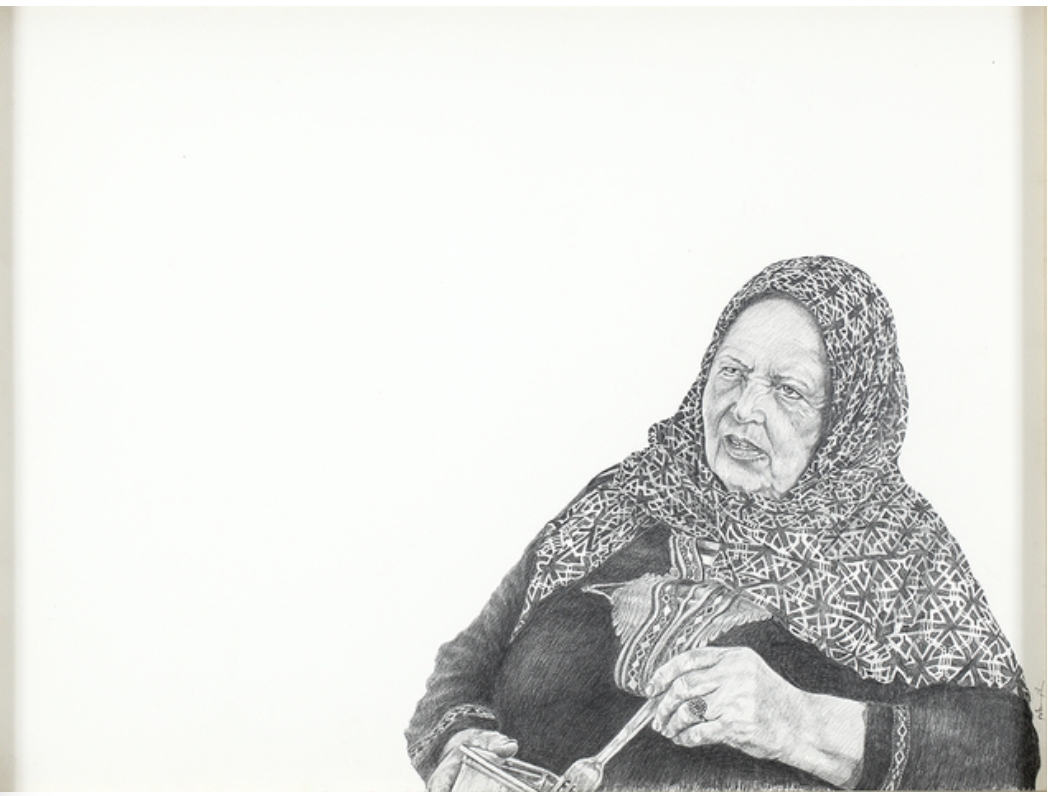 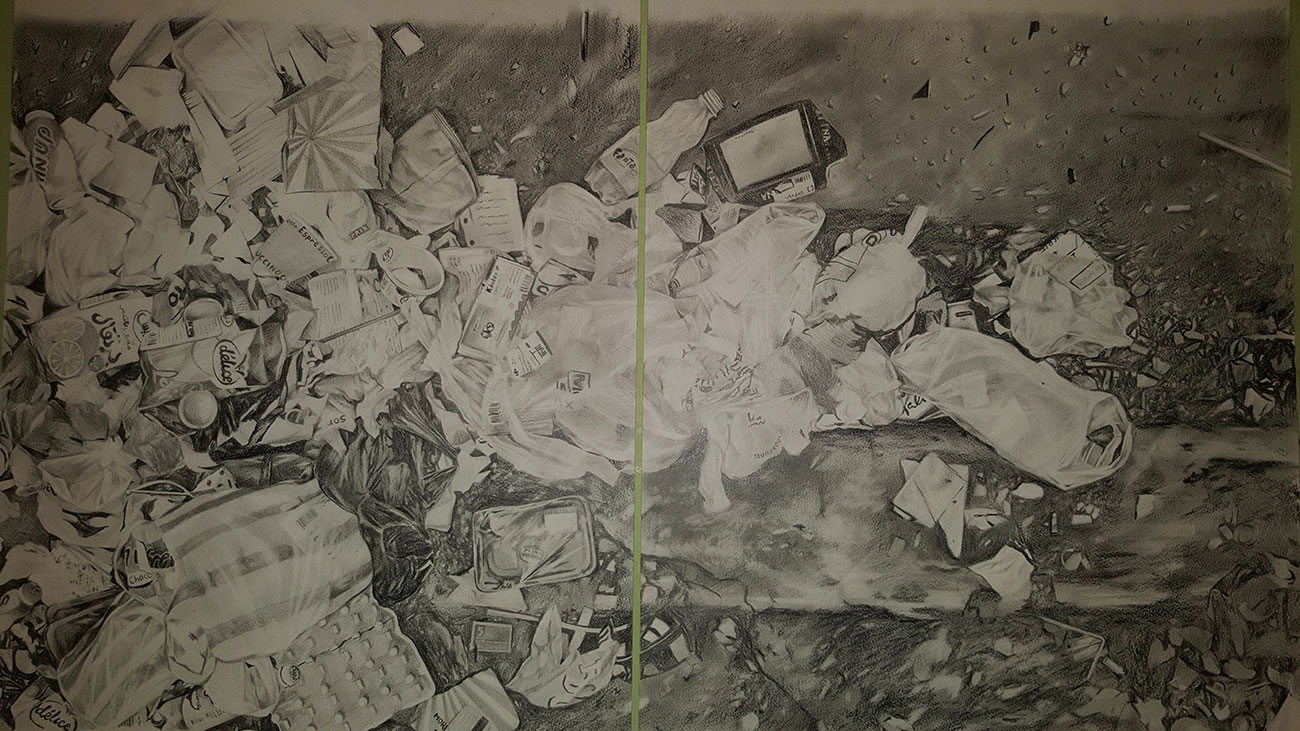 Walid Ardhaoui obtained his Interior Design degree in 2006 from the Higher Institute of Fine Arts of Tunis and a Diploma of English in 2008 from the Dublin School of English. He has been exhibiting since 1994, first as a student at the El Omrane Arts Pilot High School and then from 2014 he participated in several artistic events such as “Al Maken” in Sidi Bou Said, and group exhibition in EL Teatro. His first solo exhibition was “AL MAHJOUZ”, the seized, EL Teatro, in April 2016, where he presented oil paintings on recycled wood and cement, offering realistic figures, which were immersed in a consumerist newspaper. In 2017 his solo exihibition “BARZAKH”, isthmus was at Aicha Gorgi gallery and part of the Jaou 2017 event organized by kamel Lazaar Foundation. He is currently based in Tunisia and has lived and worked between Dublin, Dubai and Abha (Saudi Arabia). 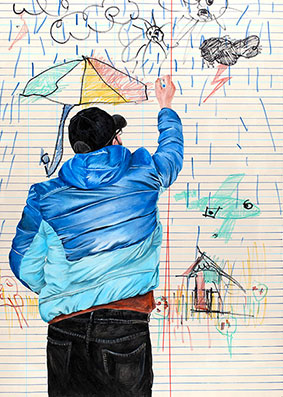